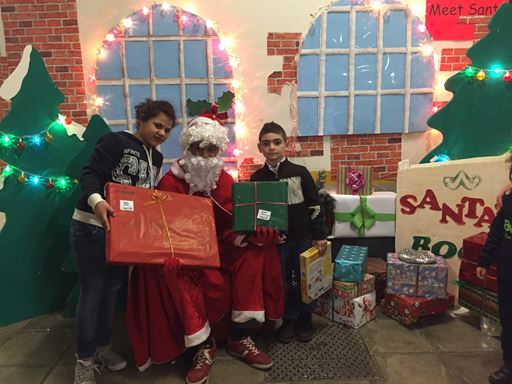 Winston Churchill once said:  "We make a living by what we get, but we make a life by what we give". There are countless ways in which one can make a change. The Orphan's Day really did prove that point as this experience left a unique impact on the prefects attending, on the teachers, and most importantly on the orphans. The Christmas event took place in the bus station, which permitted a wide space to be used. Games were distributed throughout the station, and there also was a mini food court where Christmas deserts were offered. All participants, prefects and orphans alike, felt the happiness in the atmosphere and in one another. The adrenaline and joy sufficed to set the good vibes for the day. The orphans enjoyed themselves so much, that they showed such sincere gratitude in the end, which was also a motivation for the students to repeat the experience. December 23rd was the day prefects at SABIS Adma assumed once again the responsibility to carry on good deeds.

"We, prefects, learned that what we were giving to the orphans much more than mere gifts won by playing games, we were making memories - moral souvenirs they couldn't have gotten anywhere else, at any given time. In those few hours, all the prefects understood that there is so much more to the world than what meets the eye, and there is so much more we could do to help."